"Across the world, city-builders who understand the complex relationship between land-use, car infrastructure and road congestion, struggle to communicate it in a simple way that resonates with the public. It's now well-demonstrated in transportation demand management (TDM) research and practice that you can't build your way out of traffic congestion (or parking congestion -LS) by building roads, and in fact the opposite is true - the more free-ways and car lanes you build, the more people drive and the more congestion and other negative results there are. This because of "induced traffic", or the Law of Congestion. As the saying goes, building more lanes to address congestion is like loosening your belt to address obesity." Read Brent Toderian's Blog at PLANetizen.
Posted by lagunastreets at 2:01 PM No comments:

Here is a portrait of two families who shuttle their kids less than 3 miles to school. One family lives in Los Angeles and shuttle with an SUV, the other in Portland shuttle a bike caravan to school. Both are concerned their kids receive enough daily exercise for health and academic reasons. 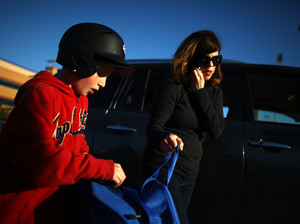 Yvonne Condes in Los Angeles: "And, because Condes lives in Los Angeles where traffic is a huge problem, shuttling her kids back and forth can take 5 minutes or 25. Some days Condes has spent 45 minutes just to go a mile." ... "There's a homeless guy lives down the street, and sometimes he'll start yelling, he walks into the busy street yelling at cars." (Who hasn't?) ... And that's why, most days of the week, Condes finds herself in the car driving her boys to 'club' sports. All the driving can be frustrating, she says, in large part because "there's so much time where we're not actually doing anything, just traveling from one place to the other." 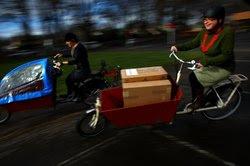 Martina Fahrner of Portland:
Fahrner and her family bike, walk or take public transportation. For them exercise is something that happens as they live their daily lives, not something they schedule. Fahrner doesn't even own a car.  "We basically mapped out where the schools are, where hospitals are, where places to shop are, and so we very conscientiously picked a neighborhood where we can walk to all these things," she says.

Martina is co-owner of Clever Cycles. You won't find any Lycra in her shop; the bikes there are designed for everyday living. One of her favorites is a Bakfiets front loader from the Netherlands. It looks a bit like a wheelbarrow with a bicycle attached. "You can literally put eight bags of groceries in there and the kids, and it's just so much fun to ride," she says. Excerpts from " How Families Struggle to Eat Well and Exercise", NPR, aired on KPBS San Diego.
Posted by lagunastreets at 8:56 AM No comments:

Hint: "The Times Square Alliance hired Project for Public Spaces (PPS), from May 2006 to June 2007, to better understand and re-imagine how Times Square performs as a public space."

If you have not visited Time Square lately here's a photo. The LB Planning Commission could get Forest Avenue right, if they wanted to. Credit Project for Public Spaces.
Posted by lagunastreets at 7:34 PM No comments: 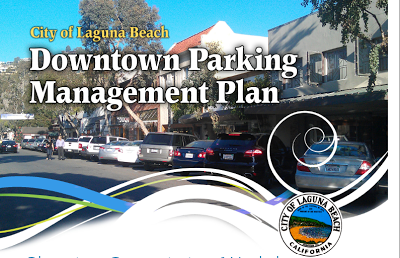 Here we go again. The LB Planning Commission invites you the public to "assess parking opportunities, constraints, policy analysis, options and alternatives" for parking even more cars in downtown Laguna Beach. The PC will demonstrate their greatest trick: how to park 100,000 summer visitors and 2200 city employees in only 1535 downtown parking spaces. This invitation cover photo shows the existing parking on Forest Avenue.
YO!  PC heads-up:        Forest Avenue already IS a parking lot.
Posted by lagunastreets at 10:05 PM 1 comment:

Methylphenidate is a buffered form of methamphetamine (speed) used to treat symptoms of ADHD (Attention Defecit Hyperactivity Distorder) and depression, common brand names are Ritalin and Adderall. The drug is considered a controlled substance but prescribed in epidemic proportions to school-age children diagnosed with ADHD or to control students unruly behavior in class (a practice called "medicated management" or M&M's by practitioners). What follows are excerpts from interviews with scholars in the field who identify the symptoms and prescribed treatment of the disorder, but do not examine causes. Then there is the case of Adam Liebovitz who treats his ADHD successfully with exercise by riding his bike (see Riding is my Ritalin below).


"The United Nations released a report in February of 1996 expressing concern over the discovery that 10 percent to 12 percent of all male school children in the United States currently take the drug, a rate far surpassing that in any other country in the world. Indeed, citizens of the United States, most of them well below the legal drinking or smoking age, now consume over 90 percent of methylphenidate produced worldwide each year."

"There is something odd, if not downright ironic, about the picture of millions of American school children filing out of 'drug-awareness' classes to line up in the school nurse's office for their midday dose of amphetamine. It is this sort of image that fires the imaginations of Ritalin's critics--critics like child psychiatrist Carl L. Kline of the University of British Columbia who was reported in the August 4, 1991, New York Times Education Supplement as saying that Ritalin is nothing more than a street drug being administered to cover the fact that we don't know what's going on with these children."

Here are interviews with scholars and experts on the subject, all of them illustrate symptoms and treatment of the condition. One isolates causes as simply hereditary, but nobody blames lifestyle or environment.


As a neurobiological disorder of self-control and attention problems:
The Ritalin Explosion, Harvey Parker, FRONTLINE

It is inevitable, prescriptions chase diagnosis:
Statistics on Simulant Use, FRONTLINE

"If 'accelerated' has become the new normal, there’s no choice but to diagnose the kids developing at a normal rate with a disorder. Instead of leveling the playing field for kids who really do suffer from a deficit, we’re ratcheting up the level of competition with performance-enhancing drugs. We’re juicing our kids for school."

"We’re also ensuring that down the road, when faced with other challenges that high school, college and adult life are sure to bring, our children will use the coping skills we’ve taught them. They’ll reach for a pill."


Change in Lifestyle and a Cure

In 1978, two years before the National Institute of Mental Health (NIMH) recognized ADHD as a condition, W. Mark Shipman, MD, conducted a simple test. Shipman sent a group of hyperactive kids running for as much as 45 minutes a day, four days a week. An amazing thing happened: The running kids started acting as if they were getting extra doses of medication.

After a while, the doctors who monitored the behavior of each child began lowering drug doses for most of the runners. Very few nonrunning participants had their doses reduced. The doctors who were administering the doses didn't know which students were running; the changes in behavior were that clear. 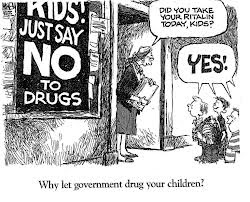 Shipman's study might have led to a boom in physical fitness programs for ADHD-identified kids. It didn't. Instead, just the opposite occurred: Doctors began writing more prescriptions.

It wasn't that Shipman's research was discredited. In fact, at least two other studies conducted in the 1980s confirmed his findings. What happened instead was a societal shift away from time-consuming natural remedies such as exercise and in favor of quick-fix solutions part of the same cultural sea change that has resulted in the nation's worsening obesity problem.

At the time of Shipman's study, few parents had heard of Ritalin. By 1988, half a million kids were taking the drug. By 1995 that figure had quadrupled. The United States was using five times as much Ritalin as the rest of the planet combined. "An increase of this magnitude in the use of a single medication," observed pediatrician and Running on Ritalin author Lawrence Diller, MD, "is unprecedented for a drug that is treated as a controlled substance."
Following this article there are a 102 Comments, like this one:

"I took Ritalin or Adderall for 20 years. I now realize that you cannot take prescribed speed for that long without it having serious effects on your health. So I have been off of it for 6 months. I have very little motivation. Do you think it just takes time? Any suggestions would be appreciated. I feel like I am in a whole new reality and it is scary. Thank you."

Posted by lagunastreets at 8:26 PM No comments: 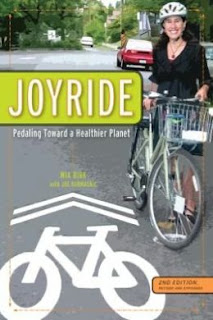 "Anyone interested in changing their life (style) or community for the better is going to love Joyride"- Earl Blumenauer, Member of Congress.

Here are excerpts of obstacles Mia encounters along the way.

Traffic Engineer Mike:  ".... keeping car traffic moving is very, very important." Engineer Stephen: "The businesses aren't going to like it, especially if we touch their parking." Engineer Rob: "Fifty feet. Eight feet of parking on each side, three 12-foot-wide travel lanes. Pretty tight. Not sure how we could squeeze in a bike lane." Fireman to mom clutching toddler: "Where's your child's bedroom? It takes another 40 seconds to reach his room. These speed bumps will slow down our response time. Your child's life is at stake."  Ponytail man at podium: "You're going to have to pay me for the damage to my motorboat." Lumberjack at podium: "You'll have to pry my cold, dead hands from my steering wheel."

Chapter 1, at the Police Bureau:
After a series of unnecessarily aggressive police actions that result in dozens of pricey tickets to cyclists, I arrange what I envision as a cordial discussion about enforcement of cyclist-related laws. This, I am sure, will end with a common understanding and newfound close partnership. We'll walk in as strangers and walk out as friends.

Once the doughnuts are consumed I pass out a one-page summary. A nano-second later an officer cuts me off with "Under who's authority do you speak? Are you a lawyer?" I hold my smile. "Well no I'm the (Portland) bicycle coordinator. I am very familiar with these laws and ...."

He raises his hand in protest. "We are sworn to uphold the law. Your personal interpretation means nothing to us."

Seconds later I am staring at an empty room. "Ah yes" I think, "that went well."  Joyride by Mia Burke, Amazon Books.

Posted by lagunastreets at 2:13 PM No comments: 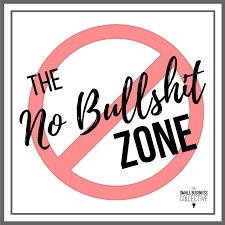